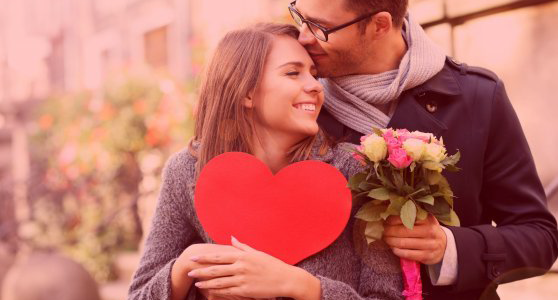 While both men and women are biologically similar to some extent and make use of words to express their feelings, their codes of behavior and deepest desires are different, this might be why they say men are from Mars and women from Venus.

In order to better understand how men and women celebrate and what expectations they have for Valentine’s Day, our Analysis team at iusecoupon.com conducted a survey among its users.

This took into consideration the differences between both genders on an emotional, psychological, sociocultural level, among others.

Valentine’s Day is a very popular holiday among the British population, as 71% of our respondents indicate. Most of them (69%) said they will use this opportunity to show affection to their better half while 27% and 4% will celebrate Valentine’s Day with their families and friends respectively.

In United Kingdom, men are willing to spend up to 133 euros on Valentine’s Day gift while women budget about 96 euros for this day. Average of 115 euros is spent on Valentine’s gifts by the Brits.

We also discovered that most of our respondents (63%) prefer to buy gifts in February or at the last minute – on the 13th and 14th of the same month. This information corresponds to the data found on the our platforms, where we observed an increase in online shopping activity during the two weeks before the lover’s day

What can make a woman happy this day? Gifts or experiences? 49% of the female respondents indicated that both the material and non-material aspects are equally important. 34% prefer intimacy and emotional experiences on Valentine’s Day, only 17% wants to receive gifts on this day.

Among the most desired gift ideas for women, Clothes and Jewelry is most preferred gift idea by the British women as 33% of them indicated. 24% will love to get money as gifts while 21% wants flower. The least desired gift option for the women is stuffed animal (5%) followed by Cosmetics (17%)

What would an unforgettable Valentine’s Day experience be like for the ladies? Going on a love trip outside the city and going for a concert are the most preferred options for them. Only 11% wants to chill at home making it the least desired Valentine’s Day treat.

Coming to the men’s side, 69% expect to get both material and non-material gifts on the Valentine’s Day. 13% is okay with just gifts while 26% wants intimacy and attention.

Cosmetic is unsurprisingly the least desired gift option for the men as only 3% of the male respondents want this. 39% of them wants money making it the most preferred gift category.

Most men would prefer to go on a love date/outing as voted by 26% of the male respondents. 22% prefer going to a concert on the lover’s day while 21% will love to go on a love trip with their significant other.

United states reported the highest in average spending budget by country with 179 euros, Singapore and United Kingdom are second and third in the ranking with 136 euros and 115 euros respectively.

During the period of January 2020, 6,942 people from Africa, Asia, America, Europe and Australia were surveyed in a total of 40 countries where the tradition of Valentine’s Day is present. Finally, the indicators for the month of January 2020 were used to convert the currency.

Would you like to share our data on Valentine’s day? You can freely use the data and infographics presented in the text for both commercial and non-commercial purposes.